What art and drama can do for journalism

This is an expanded version of the talk I gave at a panel called “Goodbye News, Hello Drama: visual forms and post-news journalism” at the 2019 Perugia International Journalism Festival. I am indebted to many for the ideas here, but especially to my fellow panelists Hossein Derakshan, Shazna Nessa and Lucy Rohr for the conversation.

Why should we look to art and drama for lessons on how journalism can thrive in the twenty-first century?

I believe it is because the function of journalism is changing. Traditionally, journalism operates on the premise that news is valuable because information is scarce. Reported, verified facts have power in a society of diverse individuals because everyone shares a common, objective reality constructed from those facts.

That is increasingly no longer the case. On some of our most important issues, verified facts are abundant and there is information overload instead of scarcity. Meanwhile, the internet has fragmented public society into private communities constructed on common emotional truths.

In this world, the function of journalism shifts. Beyond establishing and analysing facts, journalism’s key role is empathy-as-a-service: By helping people achieve an emotional understanding of others’ motivations, we hold open the space for civic dialogue between different communities.

To do so, journalism needs the ability to break through people’s consciousness when they feel overwhelmed by information. It also needs to reach places where traditional journalism is either inaccessible or is being actively rejected.

This is where art and drama can help, and there are recent examples of artist/journalist collaborations that show the value of this interdisciplinary work.

Last October, the Financial Times commissioned Clare Dwyer Hogg, a journalist and playwright from northern Ireland, to write a poem about the Irish backstop. The actor Stephen Rea performed a reading of the poem on the border itself. The resulting 8-minute film became one of our most-viewed videos, and has since been screened at film festivals.

“We wanted to express this feeling of the border being both there and not there — of it being hugely important but not a physical barrier, which was central to the idea,” my colleague Juliet Riddell, who made the film, told journalism.co.uk.

“The creative arts communicate a truth — they articulate a way that you might feel but haven’t found the words for yourself.”

This desire — to convey an emotional truth, and to do so via a format that surprises and breaks through to people’s consciousness — lies behind my own work in using newsgames to tell the story of full-time Uber drivers, or that of business owners grappling with the US-China trade tariffs. 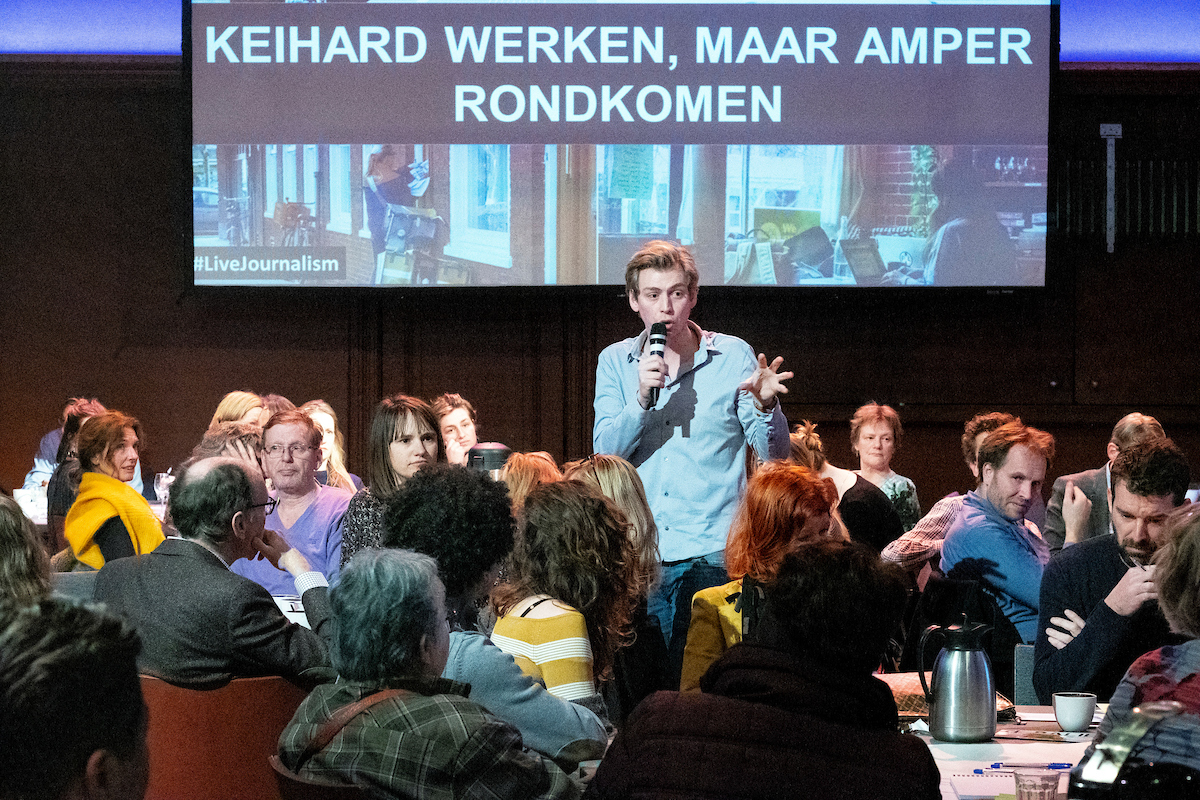 At the De Balie cultural centre in Amsterdam, project leader Tim Wagemaker and several journalists are exploring what it means to bring an investigation into a community space over several months.

Their first story is on the working poor in Amsterdam. There was a traditional news article on the issue in NRC Handelsblad, the national newspaper, but that was only the kicking-off point. The journalists profiled dozens of people who are among the working poor, and De Balie hosted 100 members of the community for a ‘public editorial meeting’ to discuss the issue. The meeting attracted on different sides of the issue, and was framed by asking the attendees: “What do you need from here?”

This has already yielded tangible impact. The project sparked policy research into municipal regulations, it found sources for the story for the journalists, and the brainstorming session led the journalists to reorient their coverage to look at high fixed expenditure, as well as income, as a problem for the working poor.

It has also thrown up new tensions and questions. “We’ve noticed that when you open up your investigation from the beginning also the people you are investigating get involved immediately, which creates an interesting tension,” Tim said.

The whole project will culminate in a theatre performance, set in an editors’ room, where the findings of the project will be presented in the form of a play and a conversation. Amsterdam’s alderman responsible for poverty has been invited to attend and to respond.

“So we present all our findings. Facts. Research. In a combination of ways,” Tim said. “Theatre allows us to dive into societal questions around poverty: because after all it is a question to relate to for all of us: do we accept that there are people living in Amsterdam who work hard, but don’t make enough money to build a future?” 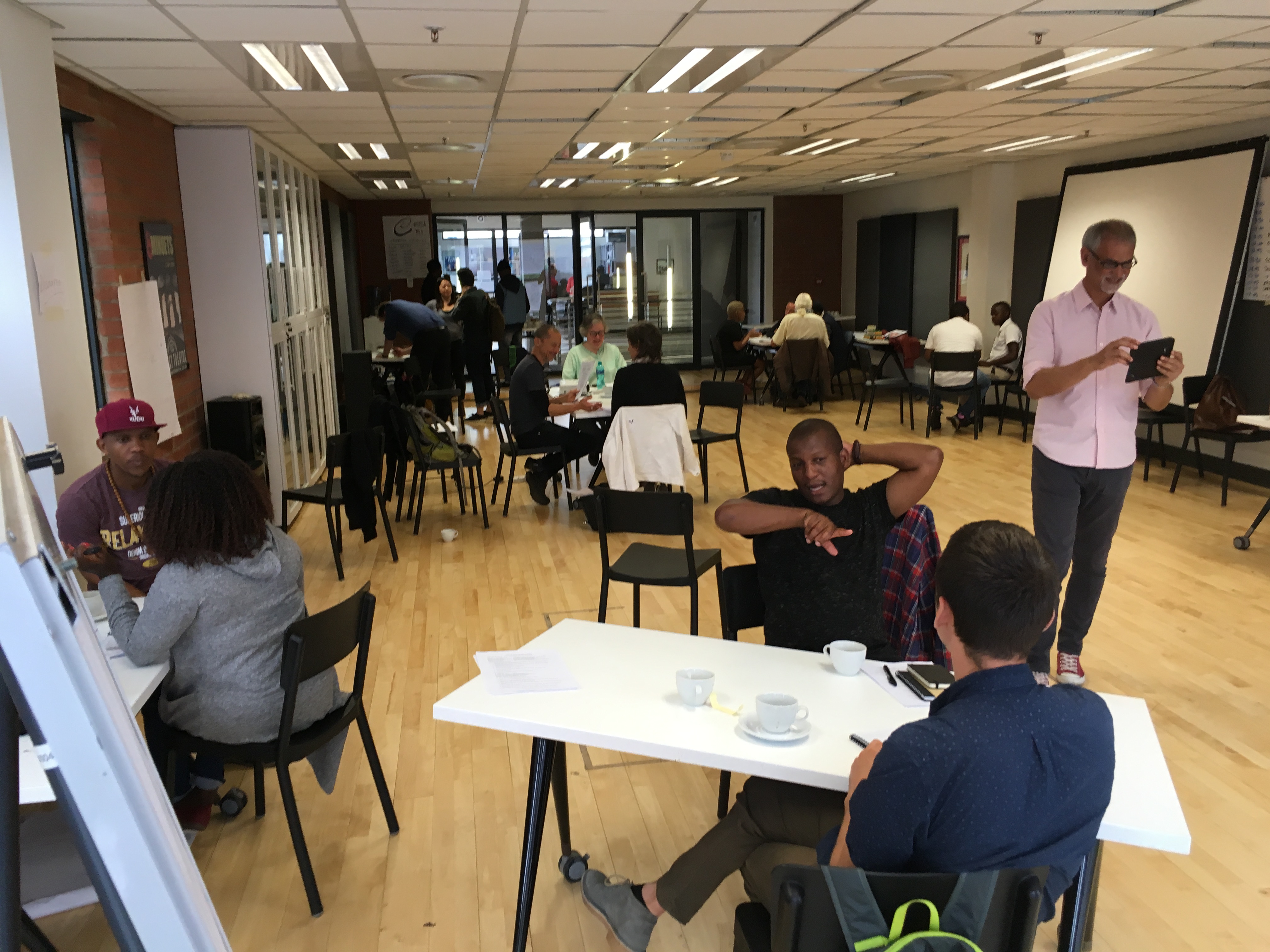 Bringing artist and journalists together requires new ways of working. Collaboration rarely ‘just happens’, and requires asking difficult questions, such as who has the final say over the resulting work?

The Contemporary Narrative Labs experiment the Financial Times ran with the Battersea Arts Centre and Queen Mary University last year was the first step towards tackling some of those issues. This was further refined in South Africa through the Creative Storytelling workshop funded by the Open Societies Foundation.

There, veteran playwright Mike Van Graan facilitated a workshop to pair up 6-8 journalists with theatre-makers and artists, to create works that brings investigative journalism into local communities.

These plays, now being performed, are not just taking place in traditional theatres. They are being performed at taxi ranks, school halls and outside a military base. Often, the performances are multi-lingual and in local dialects—a result of journalists collaborating and working with local artists.

The collaborations I highlighted are but a small selection of cases where journalism and art converge. At the Financial Times, we have recently set the US yield curve to music, and brought our journalists on stage in a collaboration with Live Magazine.

Art and drama can help journalism not only through the creation of work that breaks through indifference and opens space for conversation. What is most exciting for me is seeing the development of a model for journalist/artist collaborations. Besides the investigation into the working poor of Amsterdam, De Balie will tackle three other stories this year. The Creative Storytelling workshop model, if successful, could be exported to other regions and countries by the Open Societies Foundation.

What to read next: The Contemporary Narratives Lab