Contemporary Narratives Laboratory (CNL) is a partnership between People’s Palace Projects, Queen Mary University of London, The Financial Times and Battersea Arts Centre. It brings together artists, researchers and journalists to explore how creative approaches to storytelling can support innovation in journalistic and artistic practices.

See this earlier post for an introduction to the project and an explanation of our motivations and goals.

On June 29, after just four days of development and rehearsal, five sets of artists presented their works-in-progress to a live audience of 40 people at the Battersea Arts Centre.

The artists were paired up with Financial Times reporters and each of their 10-minute pieces explored how theatre, performance and journalism can come together to spark curiosity and create meaningful experiences.

Actions from the afterlife

Rhiannon chose to work Emma Jacobs’ story on ‘grief tech’, or How technology is changing the way we grieve. In her piece, Emma wrote about technology such as AI chatbots and digital monuments that sought to help people communicate their loss and process their grief.

“With so much anguish about technology ruining people’s ability to forge human connections, grief tech feels, perversely, rather cathartic to me,” Emma wrote in her story. “Strip out the exuberance of tech inventors and what you find is nothing new — just the latest machine through which to process grief.” 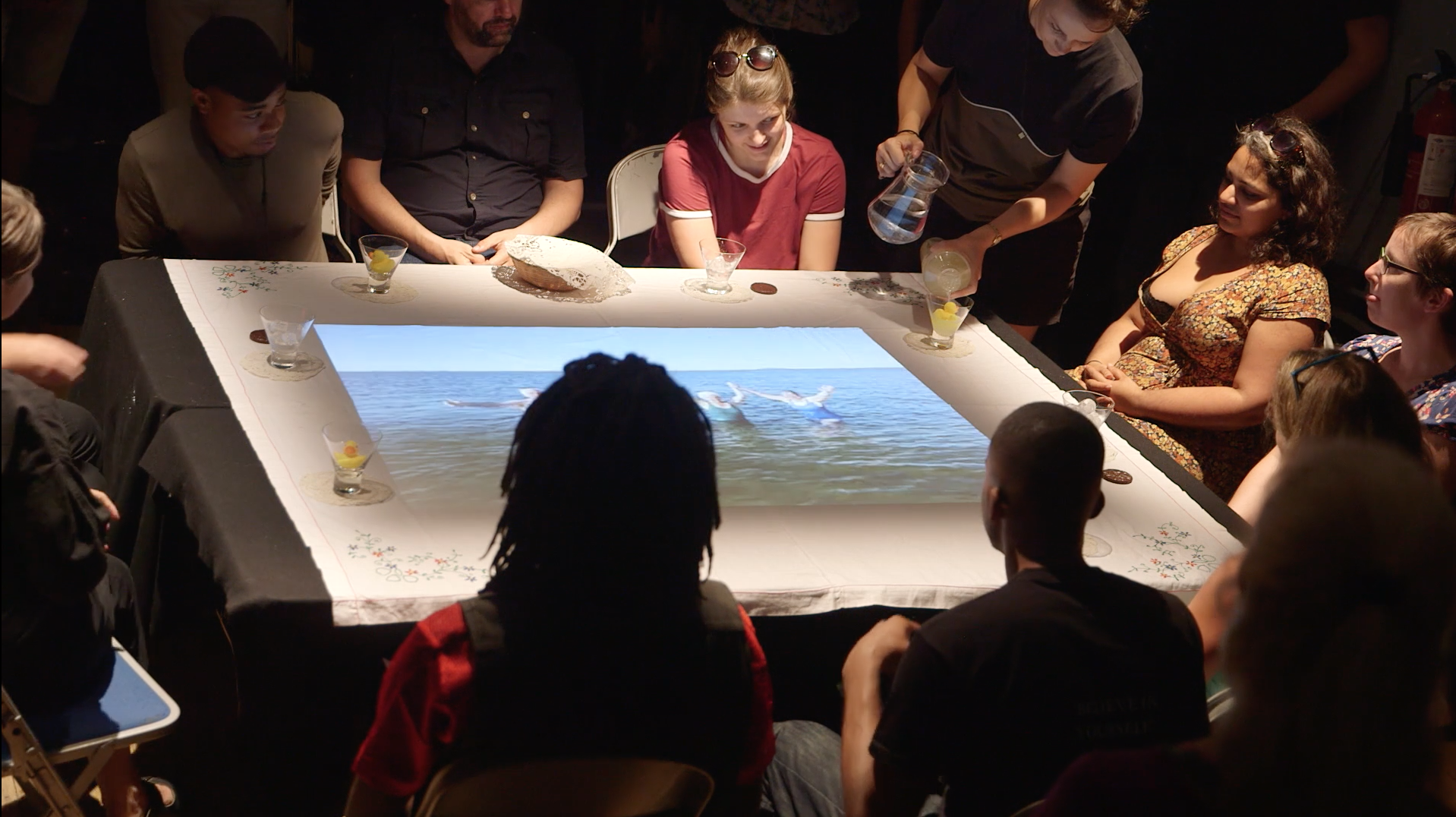 Actions from the afterlife, Rhiannon Armstrong

Rhiannon created an interactive piece that asked participants sat around a table to perform actions on behalf of others in the audience. It represented the commemorative rituals we do for those who have died, and argues that it is those actions that make up their afterlife. This provided a jumping off point to explore how we do things for and on behalf of others as part of our online life, of private grief vs public ritual, and, crucially, who profits from digital acts of remembrance.

It’s a live piece of work. “Thinking, feeling and doing are all part of the experience,” Rhiannon said. This meant careful control of the pacing to “put space in there for audiences to have their own thought processes and make their own connections”.

Rhiannon Armstrong makes work under the lifelong series title Instructions for Empathetic Living. She places conversation at the centre of her practice in order to address important subjects in an accessible manner.

Emma Jacobs writes features and interviews across the Financial Times, including for Weekend and UK news. She has a particular focus on Business Life, exploring business culture and entrepreneurship. Her new column Working Lives takes a look at thriving and dying jobs amid the economic downturn.

Work Tribes is a new series in the Financial Times about the people who populate our modern workplaces, from Millennial managers and Mompreneurs to the professional conference-goer and the long-distance commuter. It’s a fictional column, but the characters and workplace dynamics it describes are informed by Emma and Andrew’s observations and experience in their career covering business life and management.

Paula brought these characters to life in a series of vignettes. She approached the pieces with the idea of providing “an alien point of view into a foreign world…Finance as something very public but also very exclusive/private/closed off”.

End of day 4 at @batterseaartscentre devising performance based on the @financialtimes work tribes column as part of #contemporarynarratives @peoplespalaceprojects #worktribes scratch tomorrow afternoon , talk about process on Monday. Front image features (from left to right) the management guru, the mum-preneur , the ambitious intern and the worried worker. 2nd image features the millennial manager

Paula Varjack is a writer, filmmaker and performance maker. Her work explores identity, the unsaid, and making the invisible visible. Trained in stage management, filmmaking and performance, she enjoys working across and combining disciplines; performance, theatre, documentary and spoken word.

Andrew Hill is an associate editor and the management editor of the FT. He is a former City editor, financial editor and comment and analysis editor. ‘Leadership in the Headlines’, a collection of his columns was published in 2016. He joined the FT in 1988 and has also worked as New York bureau chief, foreign news editor and correspondent in Brussels and Milan.

Reporters have to learn about their beats before they can explain and analyse the news to readers. To do so, they construct mental models of their areas of coverage. These mental models are usually hidden from readers but are hugely important because they inform and underpin the reporter’s articles. When Chloe first started covering blockchain and cryptocurrencies, the metaphor of Blockchain as Memory stuck in her mind as a way of understanding this complex subject. Thinking about the ways in which the two are similar, and where they differed, helped Chloe make sense of blockchain technology.

Harun tackled this piece by considering several other questions. 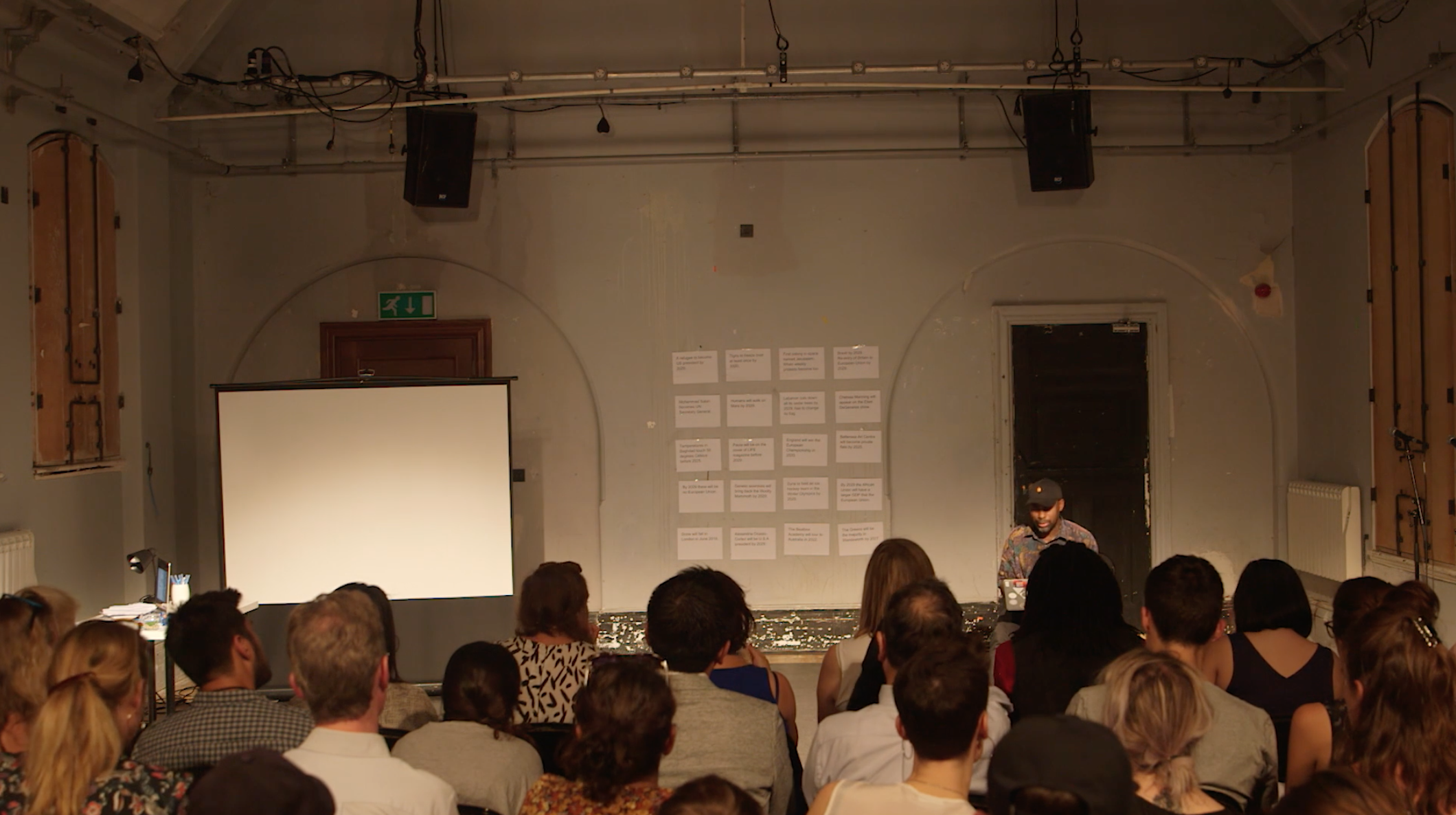 These questions led to the concept that Harun presented: Pose a series of questions about the state of the world that won’t be proven true until twenty, or fifty years later. Each question becomes a wager that the audience can bet on using real money, and all the bets in this prediction market is transacted and tracked using cryptocurrency and blockchain technology. That cryptocurrency becomes both a financial instrument and the artwork itself.

“I was interested in a piece of work that is autonomous in its own right, rather than referential to and illustrative of a certain article,” Harun said.

Harun Morrision is one half of They Are Here, is a collaborative practice that creates context-specific games where the entry, invitation or participation can be as significant as the game’s conditions and structure. Through these games, Harun seeks to create ephemeral systems and temporary, micro-communities that offer an alternate means of engaging with a situation, history or ideology.

Chloe Cornish is a Financial Times graduate trainee reporter, currently covering European capital markets from London. She previously covered a variety of technologies, including cryptocurrencies, for the FT in San Francisco.

The global effort to combat climate change requires countries and individuals to make different trade-offs in order to meet their commitments. This has follow-on effects on energy and economic policy, creating a complex, interlocking set of constraints and consequences This context is difficult to convey to readers but crucial for understanding any individual piece of news about climate policy.

It therefore creates a dilemma for journalists: Focus on trying to explain the system and people get confused and lose interest, but writing only about touching individual stories doesn’t help people understand the real forces at play.

This tension became a focus of the conversations between Tassos and Leslie.

“We talked about the difficulty of understanding the complex chains of cause and effect in the human impact on climate, and how that gives wriggle room for doubt when people want to doubt,” Tassos said. “As a species, we are wired to perceive our impact on systems when there is immediate feedback for our actions, where individual actions can be tallied. We are wired for stories.” 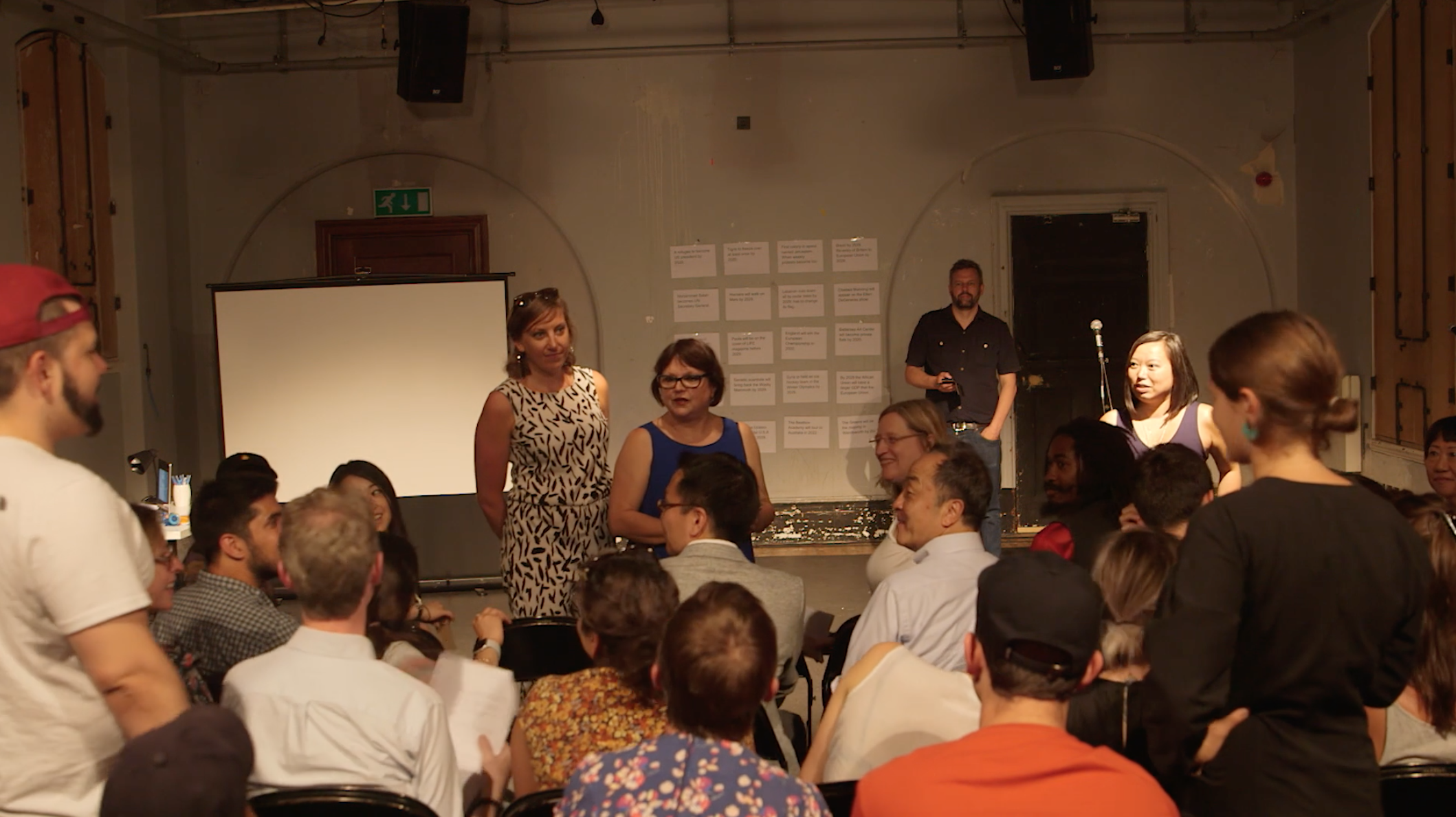 Ten was the resulting work. The audience, as a group, won if exactly ten people stood up at the end of the game, but the rules created incentives for individuals to act against the group’s interest. At the end of the contest, Tassos brought the game back to the central theme by asking the audience to discuss, and collectively answer, a climate change-related question.

I aimed to design a game which would not in any way literally model a climate system but rather some of the experiences of agency which we have when trying to decipher actions. Not much would happen. It might be uncertain what was in play. It would require a coordination of a group. There would be a tension between individuals and the group.

Tassos Stevens is artistic director of Coney. As interactive theatre-makers, Coney create games, adventures and play where people can choose to take a meaningful part.

Leslie Hook reports from ​London on carbon, the environment and the renewable energy transition worldwide. ​Her previous roles at the FT include San​ ​Francisco correspondent, Lex writer and Beijing correspondent. Prior to that she was at the Wall Street Journal.

For several years, Leslie has covered Uber as San Francisco correspondent for the Financial Times. In doing so, she has amassed extensive transcripts of her interviews with both Uber drivers and executives. These interviews, and Leslie’s other notes, were the ‘raw material’ from which she wrote articles and news stories.

In this project, Andre and Conrad wanted to adapt and transform that raw material into performance.

“We honed in on language – the difference in language between when Uber talks as a company, and when they talk about their drivers,” Andre said. When Uber talked as a company the language was corporate, but with drivers it was “all about sentiment and ‘driver experience’, and so on”.

This contrast was interesting because Uber ostensibly has a business-to-business relationship with its drivers, who are expected to operate as independent contractor and manage themselves as small, independent businesses. 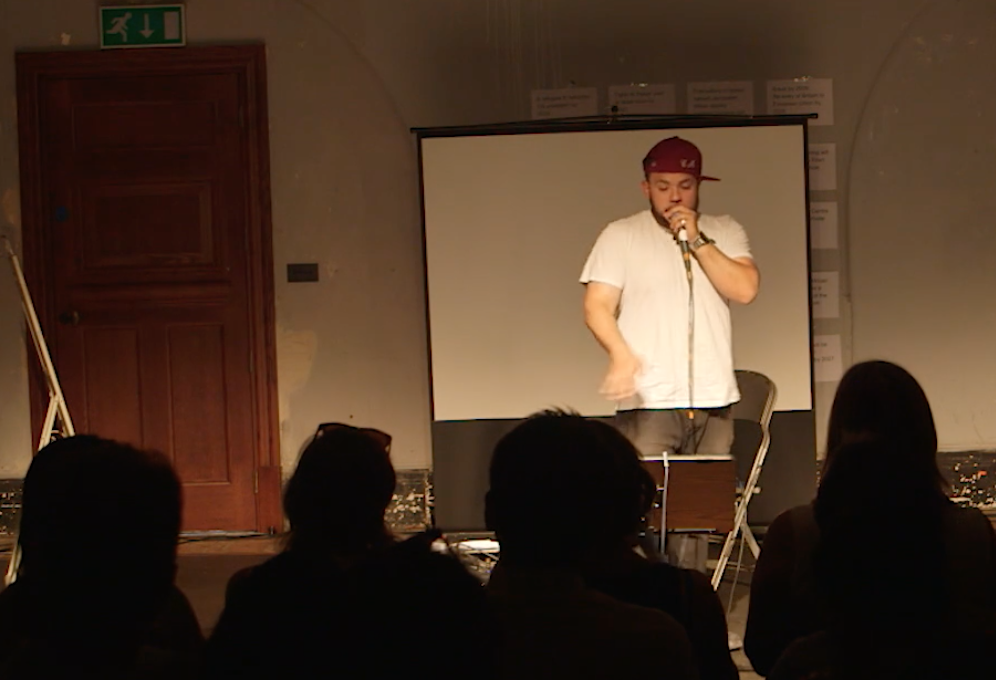 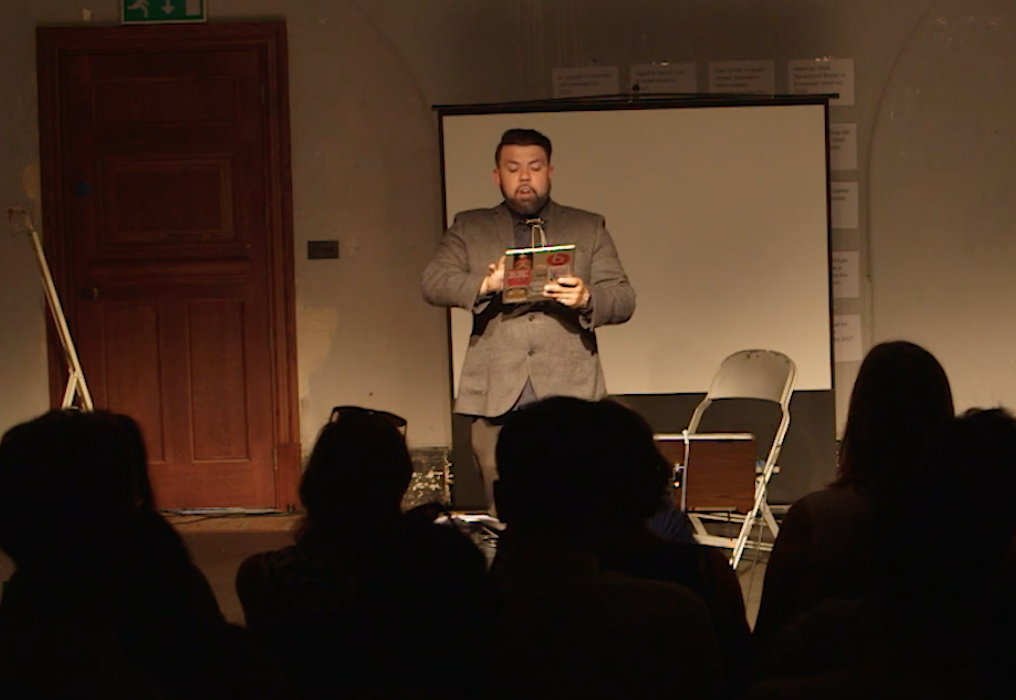 “We could have taken the material and created a play, but by working with it in different ways we can keep the audience aware that these words come from a journalist’s interviews - we can keep the source material slightly visible and perhaps present it in a balanced way, similar to what the FT would do, but in a different format,” Andre said.

Andre Piza is a researcher and theatre director regularly collaborating with People’s Palace Projects, an arts research centre based at Queen Mary University of London. Originally a graduate in Journalism from University of São Paulo, he has also worked with Battersea Arts Centre, Theatre Royal Stratford East and Contact Theatre (Manchester).

Conrad Murray is one half of theatre company Beats & Elements and the director of the BAC Beatbox Academy. He is a writer of rap, stories and music and a hip hop theatre director since 2003.

A big part of the Battersea Arts Centre’s Scratch process is feedback and iteration. By performing the works live in front of an audience, even after just a week of development, we were able to gather some really useful feedback.

On the Monday after the Scratch performance, we held a discussion with the artists and other participants to discuss and review process. Next, we’ll need to go over the audience feedback so that we can refine our questions, present some learnings, and regroup to chart the next steps of this project.

What to read next: The Contemporary Narratives Lab