These are my day 2 (Thursday 22 March) notes for iDocs 2018, a three day event dedicated to the expanding & evolving field of interactive documentary, in Bristol.

Summary of the conference

When 14, went on trip with parents to Ravenna. Saw mosaic in church.

Churches in Italy = Multimedia buildings of the past

Mosaic of Christ was cinematic. It seemed to move.

Confabulations by John Berger: Character goes to see that same mosaic in the Ravenna church. The tiles “have different colours. but not only. The same colours have different shape.” - also different angles of insertion into the mortar

This arrangement creates a certain visual effect. the still image moves because the light reflected in the fragments move. it transfigures: it reveals itself.

What are the basic elements - the tiles - of which a story is made up?

Robert McKee: Story is constructed of a series of events, which means change. This creates a significant change in the character. specifically, in the character’s value. Each change is ‘beat’. Each action pushes the story

What about data? Data expresses a value. Frames a phenomenon. Like Mosaic tile, data can express a certain shape

Example: Michael Najjar - High Altitude. Modified a mountain landscape photo to fit the shape of the a line chart of the Dax stock price. Suggests data (and perhaps finance) is shaping the world around us.

Next project: Private astronomy. On hold because uses the same type of research agreement to access Facebook data as Cambridge Analytica did. (Or possibly some of the same algorithms or APIs?)

Data is the new, second-age of accumulation of capital. (after the Marx-ian first wave)

What constitutes a documentary?

Two projects around mobile phone as a recording device:

Which of these are documentary? both?

Algorithmic editing and the possibilities that it opens up for new ways of looking at the world.

Issues around ownership/consent/control of data. But also

Data is created and shaped by what we choose to care about.

The tension between deindividualisation and personalisation: Seen through algorithms that sort us into groups.

Delour: we beome dividuals(?) (not individuals)

This is not new. There’s long been concern about individuals ‘disappearing into the numbers’.

But digital technology accelerates this.

I love Alaska in 2006 AOL accidentally dumped user data online. producers took search terms from user 711391 and built a web series based on the search term.

We’re in a bind: Should we withdraw and insulate, or dive in and improve the algorithms

Is it different when it’s an artist doing this rather than an advertiser?

How do we keep these stories complex and retain the human?

Documentarians have dealt with these ethical questions for a long time (Nanook of the North, 1922)

Documentary: uses micro-stories to connect to macro-stories. It’s about making a connection

One potential answer to how we keep the complex and human: We can make stories understand you (i.e. personalised stories) ‘Do not track’ for example. Get Lauren is another.

Rather than more theorising, we need more making. The brief: 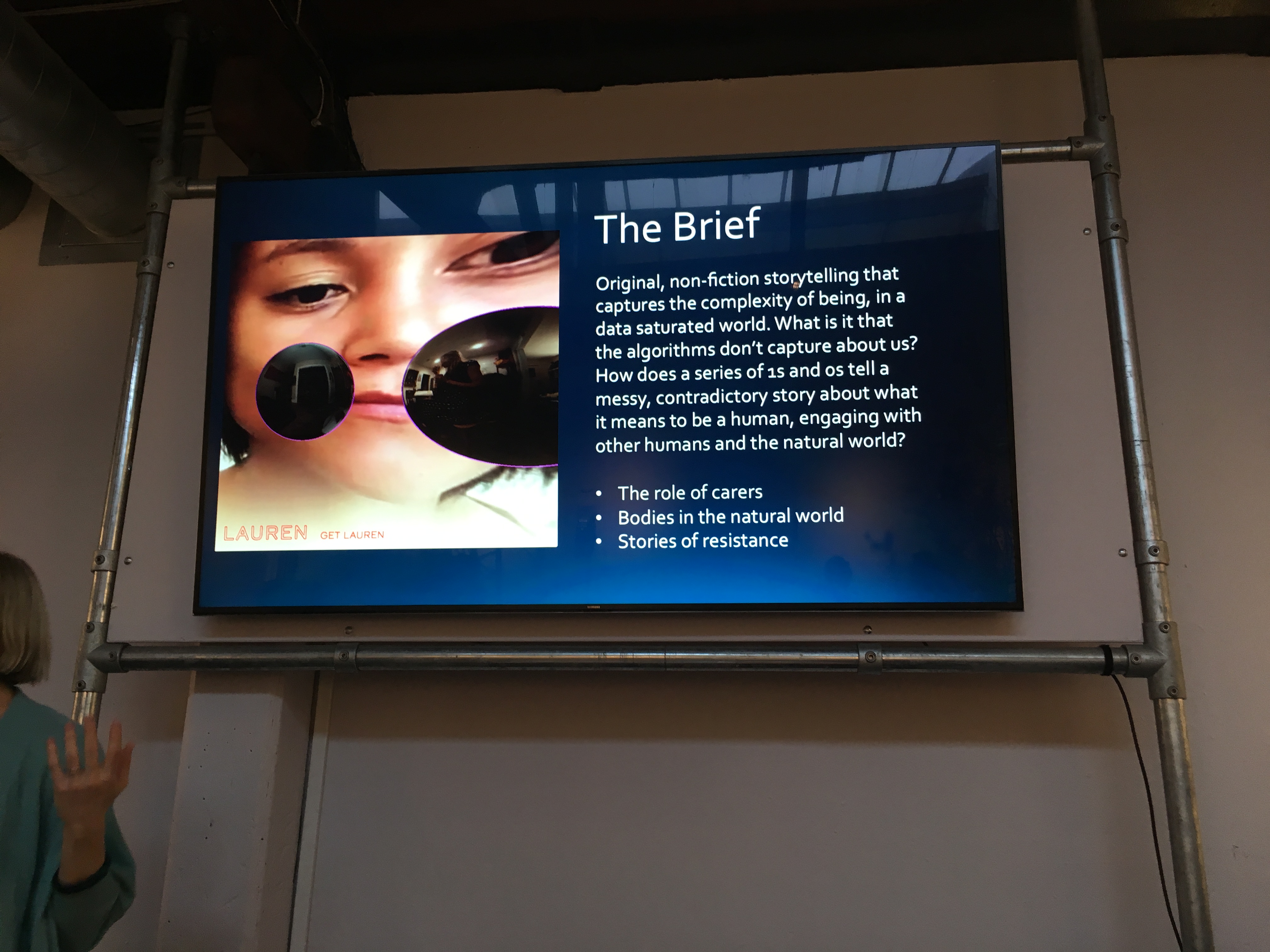 Thinking about rethinking Arnolfini around how we engage with arts and culture and what that means in terms of places.

Common point is question of relevance. How we connect, represent and convene communities.

Need to think about Place, and Authorship.

This talk: about her experience in running a public arts organisation and thinking about place.

Started with challenging and changing the debate on what it meant to go into a place and commission a piece of art.

Came up with a manifesto - new rules for public art

Rule 1. It doesn’t have to look like public art

These connect with ‘placemaking’. ‘Place’ is at a constant state of becoming, of shifting.

What we began to find out over 15 years of working is that we didn’t target a community, we built one. We started to move away from the idea of outreach.

This polarised the field of art that works with participants.

We found that the two can co-exist. Example: Nowhereisland

Oslo harbour redevelopment. Asked to come in and consider a new public art project. Oslo very segregated between East and West. Considered the question of: how do you convene a new community that crosses the east and west of the city?

Turned the whole area into allotments in 18 months. Randomly chosen who got an allotment. Started talking to bakers about opening a bakery in the area, and planting wheat nearby. 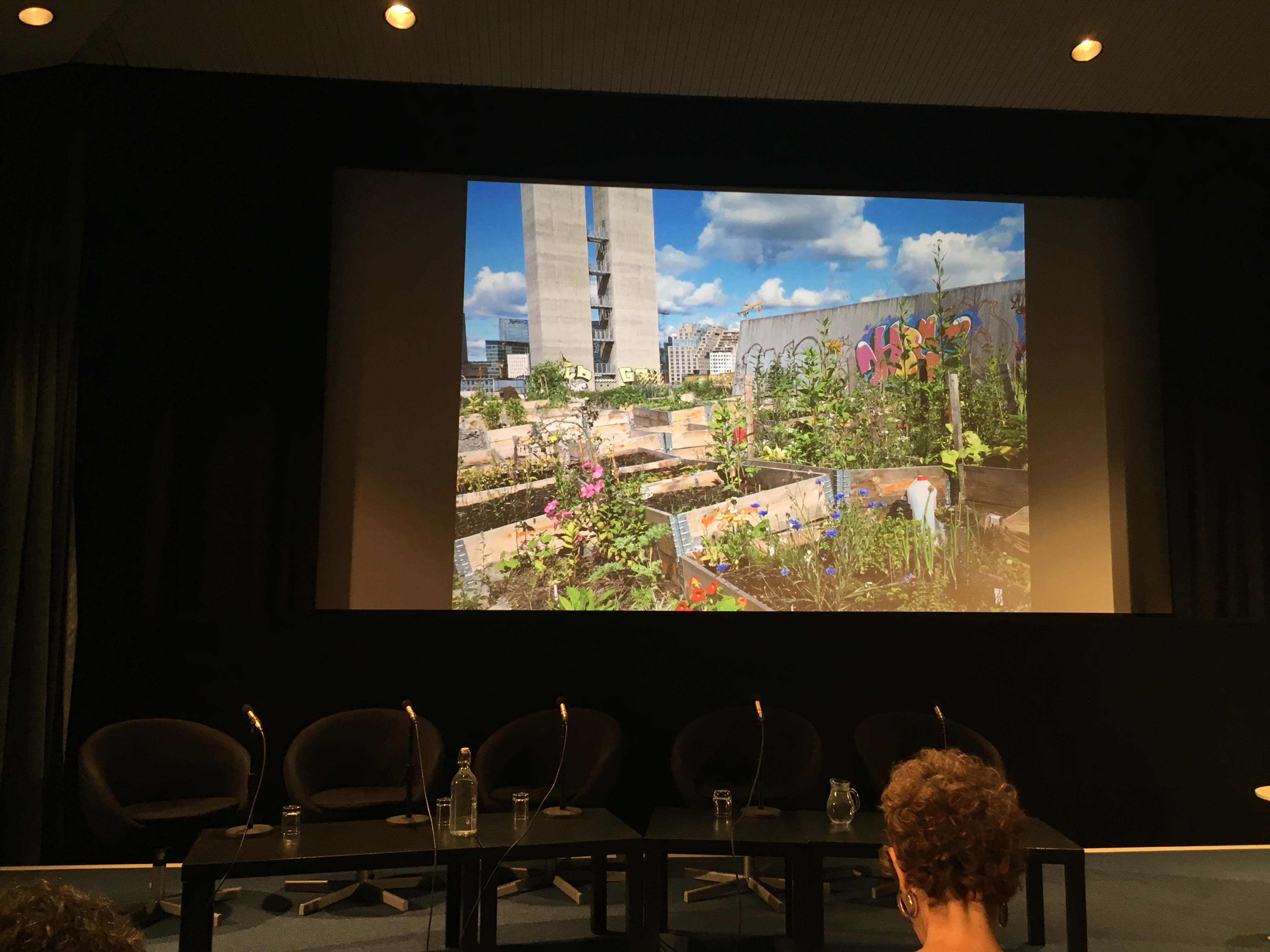 Charismatic object: Oven in a kayak. It set off a conversation (around flatbread)

Decoy: Bake house. temporary structure to show people what the bakery might look like. But it was actually a decoy for land-use agreement with the city - place now protected legally from development - has to be used for production of food.

Spoke about Bristol Temple Church redevelopment with Theaster Gates. Ramshackled structure uses pieces of material from other parts of Bristol. But also thought about how to ‘activate’ the space. How to make it come alive.

What they did: Performance schedule not announced. Also, doesn’t stop for 552 - performances roll from one on to the other.

This associated the energy of the performance with the space, but also quickly gathered a constituency. It became a portrait of Bristol in 2015.

Public art: A convergence of a physical form and an unexpected occurance that creates a connection to the place. 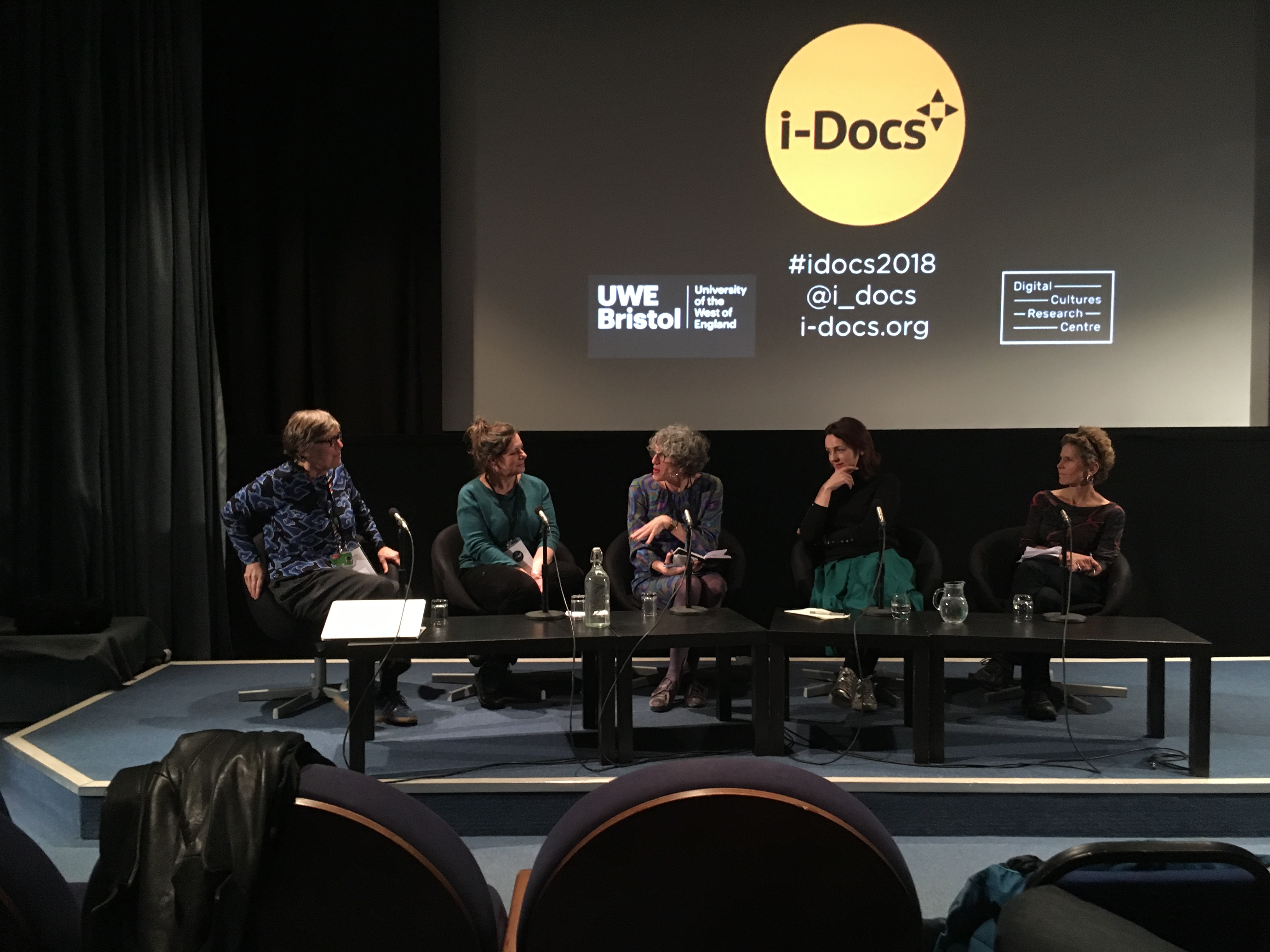 Claire: The only way the word ‘community’ works for me is as a negative. People assume communities are static, defined by clear boundaries, not overlapping. Increasingly our experience of the world is as a member of diverse sets of communities, and those are in a constant state of flux. There is huge value in a temporary coming together that may then catalyse a new set of groups.

Claire: Important question to consider: Who convenes? Why is it certain groups/entities and not others.

The role of the artist is to negotiate the apparatus and share the authorship.

Also need to consider the element of time. What to do with ‘after the temporary’?

One answer: There’s a duty of care issue. But on the other hand, there is something quite important in project like Sanctum being finite. What follows is perhaps discussion and review and follow-up, and that depends on how plugged in the project was to the existing infrastructures of the place (government, society, etc)

Tragedy of the commons can be understood as people being unable to hold a space collectively.

At the intersection of technology, art, science and the future

Still not a fan of VR. But probably because the medium has not stablisied yet.

How they work: Public spaces, collaboration and iterative production.

Example: In the Eyes of the Animal. Placed VR headsets in the forest to be discovered by festival goers and also ramblers.

Exposing people that were unaware of the tech scene and fresh to our ideas was hugely invigorrating (even when they criticised it).

The multi-sensory experience was intentional. People could already feel the forest under their toes and smell the pine, which helped us a great deal.

It was not important that the project be experienced in VR. Because we built the 3d model, we were able to adapt/syndicate to other environments, and exported digital assets.

VR headsets as ‘segways for the face’

Next project: A Colossal Wave!

What we learnt very quickly was: Never get a lead programmer to work outdoors

What we wanted to do was to observe human activity, and expose them not to an apocalyptic message or finger wagging but just accept that we are humans and we have an impact 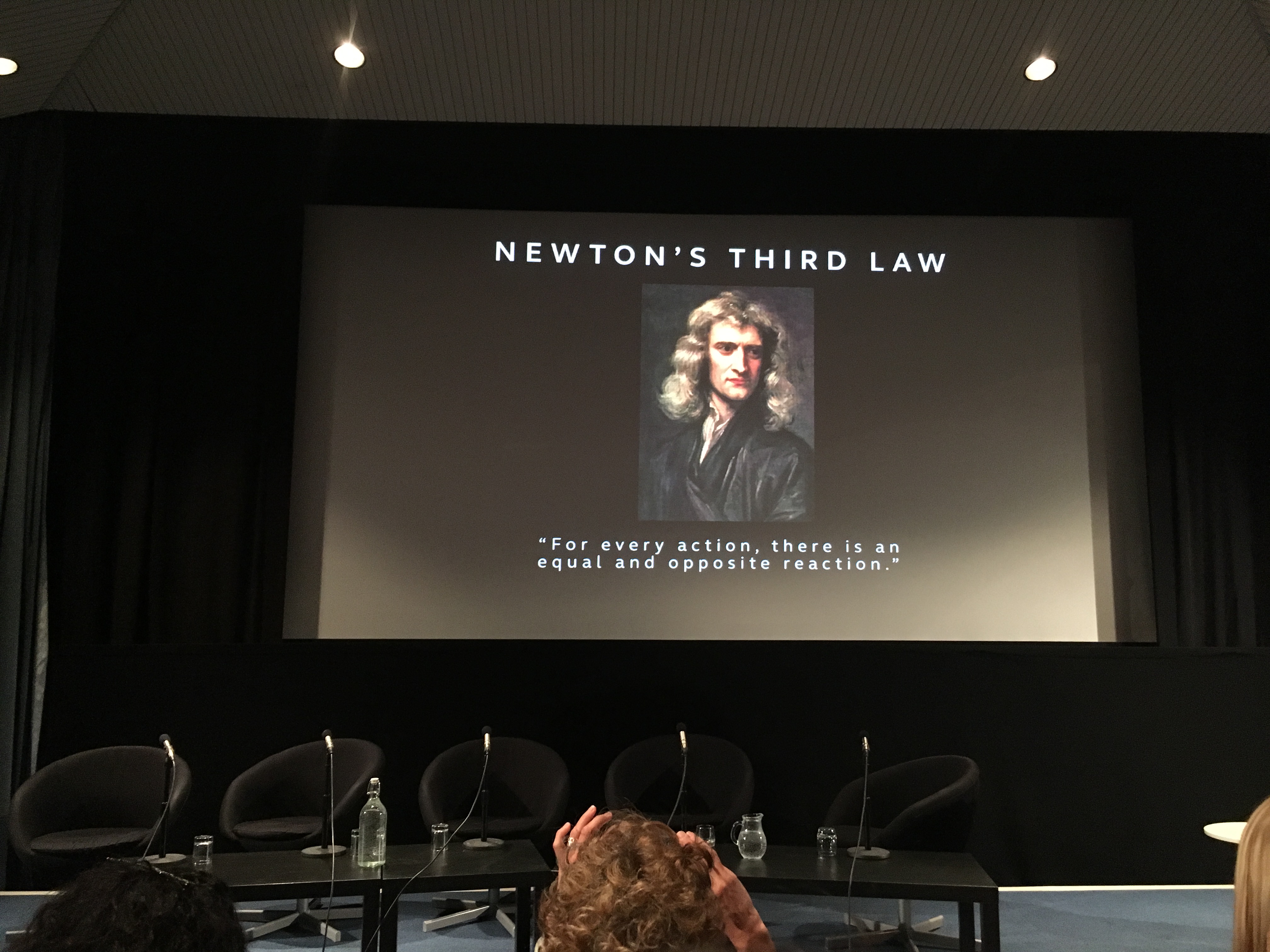 Wanted to tap into the ‘naughty kid’ instinct - that if you go up to a tower you want to chuck a bowling ball down. Over time it shapes the gong (that the bowling ball hits), which becomes a work of art that we leave with the city at the end. 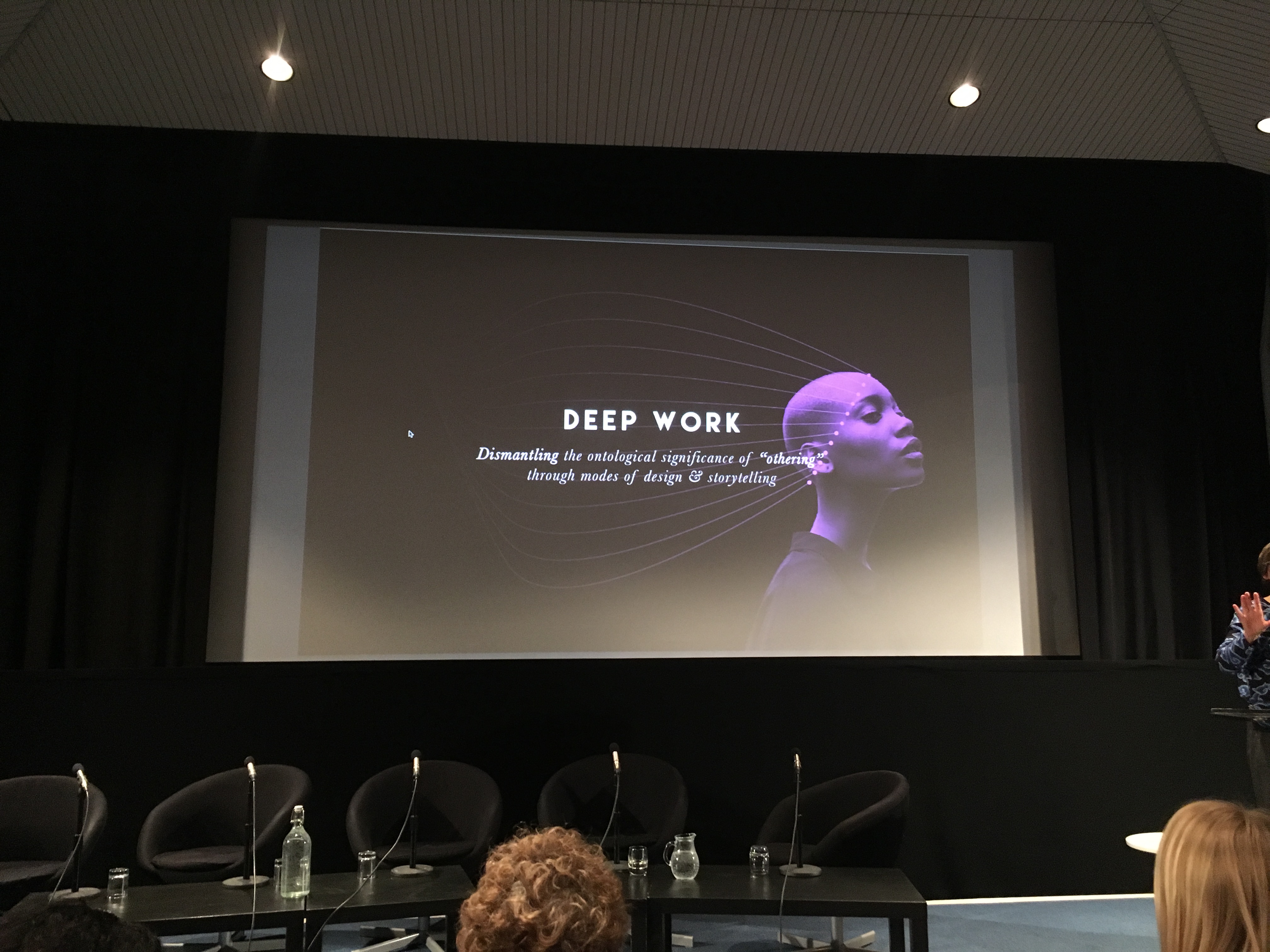 Wanted to address problem of digital discrimination and issue of lack of access for certain communities.

Initial hypothesis: We fear what we don’t know.

So, if we can simulate experience with the ‘other’ using emering technogloies maybe we can make people less afraid of who the ‘others’ are.

NeuroSpeculative AfroFeminism: NSAF (also could stand for: Not Safe As Fuck)

Situated their work in the space of a beauty salon. These are safe spaces but also political spaces. An element of beauty but also an element of conversation and tinkering.

Octavia electrodes: transcranial brain-wave devices that fits into hair extensions and can be activated by braiding techniques A lot of brain sensing and VR devices are not designed for use by people with big hair

Creating spaces: Explore the line between virtual reality and physical space and the dissonance of moving between physical spaces and digital ones

Building trust and doing it through a global appraoch.

Another leg: Education. It’s important that we don’t just show our work at festivals - every member of the collective teaches as well.

Robin: It’s a bit crap going online. When you’ve gone through all the effort of making this pagentry and the experinece, it’s much better to focus on the location-based experinece and use the online as additional information.

Robin: In the location-based experinece, the well-meaning intention of the maker and the participants are the same: it’s to make it as compelling as possible.

Carmen: Maybe it’s watered down and maybe it’s not as high quality, but reach is still important.

Previously made pop culture with a purpose, but felt that the formats she was using (games, social media etc) had a negative effect:

Started looking at socioculture and neurobiological impact of technology. 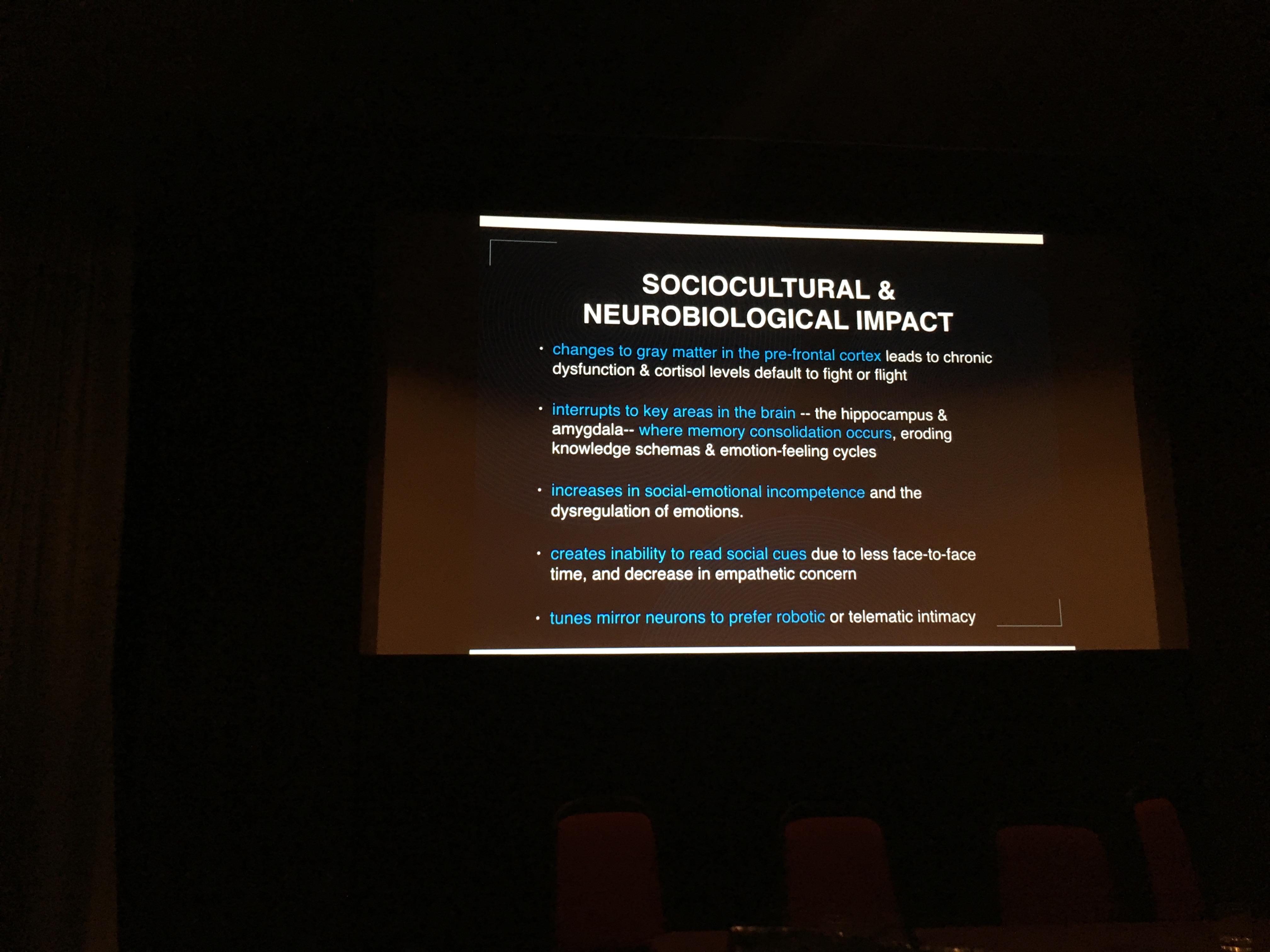 Before we can influence hearts and minds, we must first restore the loss of ‘critical feeling’

What do we actually know about empathy?

Empathy is not always positive. there are pros and cons: 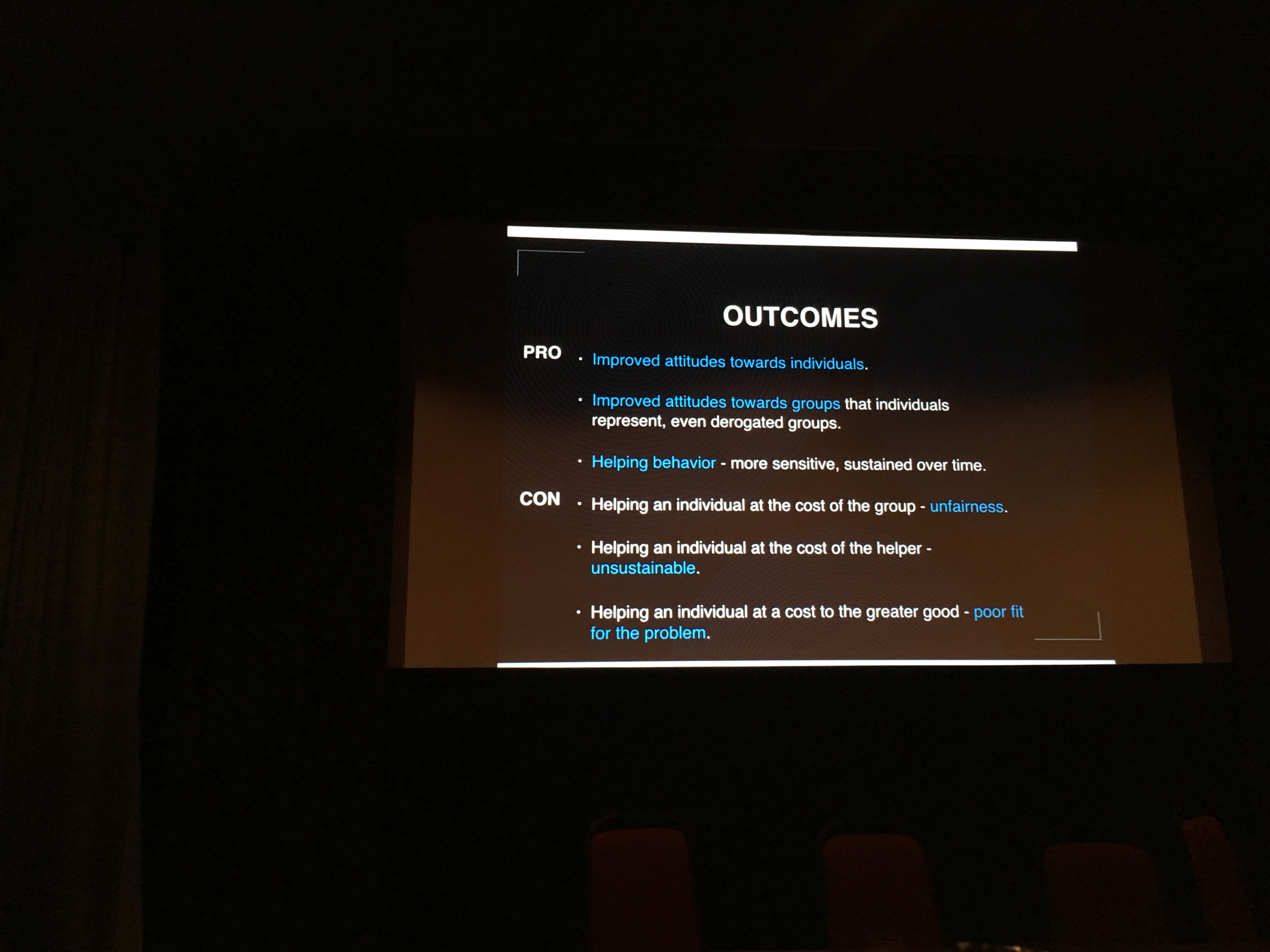 When we create project, empathy can completely derail it by leading to:

What is that moment of conversion that leads from empathy to compassion?

Reframe the brain as an embodied organited to bodily performacne.

Needed a metaphor for this engine: chose molecule of emotion

How can we imagine or realise a ‘zero-person’ perspective.

Handling a sphere is a playful, improvisational act.

Shows image of Hitler playing alone with the globe (his power fantasty), while hippies collectively play with a globe (as an act of community) - but in each, the earth (gaia) is the object.

“The core point of any imporvisational act is the contradiction between script versus coincidence - in music, dance or thinking.”

Tim Ingold, Life of Lines: “I have suggested that drawing a line on a sketch is telling a story”

In 360 video, we are positioned in the middle of the sphere. as observer/viewer, we are outside the scene. so there is this inside/outside tension. What does this ‘zero person’ perspective look like?

Implications of the tools we use to enable certain practices.

Software as designed experiences, but they are not activated until ‘performed’ by users.

A key part of what ARKit does is that it supports the creation of responsive indexical objects. There’s no distinction between 3D scanning and 3D simulation.

Documentary in AR is dependent on the user ‘performing’ the documentary. There are people who will be turned off by the prospect of that kind of labour, which means it could end up being just a stunt.